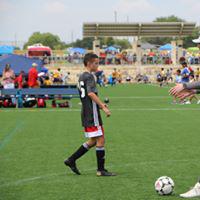 LT Elite is the select soccer program of Lake Travis Youth Association. The program was established in August 2015.

Our program starts at the U11 age group. All Teams are formed through the try-out process in which players are placed on teams based on their age and ability. These teams are coached by professional licensed coaches and compete against teams of similar level. Select soccer is designed for the competitive soccer player with an emphasis on the player’s technical development. This is the next step for players who want to train and compete at a high level, competing in South Texas leagues and cup competitions.

Each year we aim to form new U11 teams for both boys and girls with the next step for existing or new academy or recreational aged players looking to take the next step and try competitive select soccer.

We have LT Elite teams competing at Division I, SII & DII

What is select soccer?

Select soccer is 9v9 or 11v11 with licensed professional coaches. Teams are formed through a try-out process where players are selected to a roster based on their ability. This is the next step for any soccer player that feels they need the challenge and wants to be playing competitive games week in week out. The select level requires a minimum of two practices per week, plus games on the weekend.

What is our philosophy?

We believe in developing players with the correct techniques and attributes to play the game the right way.

Our club 'motto' is 'Master the ball and you master the game'.

In order to achieve this our coaches work on the fundamentals consistently to give our players the ability to possess the ball with purpose, utilize the skills to beat a player and find a way to solve the problem on the field.

As the players progress through our program we introduce the tactical elements within the game looking at both attacking and defending principles.